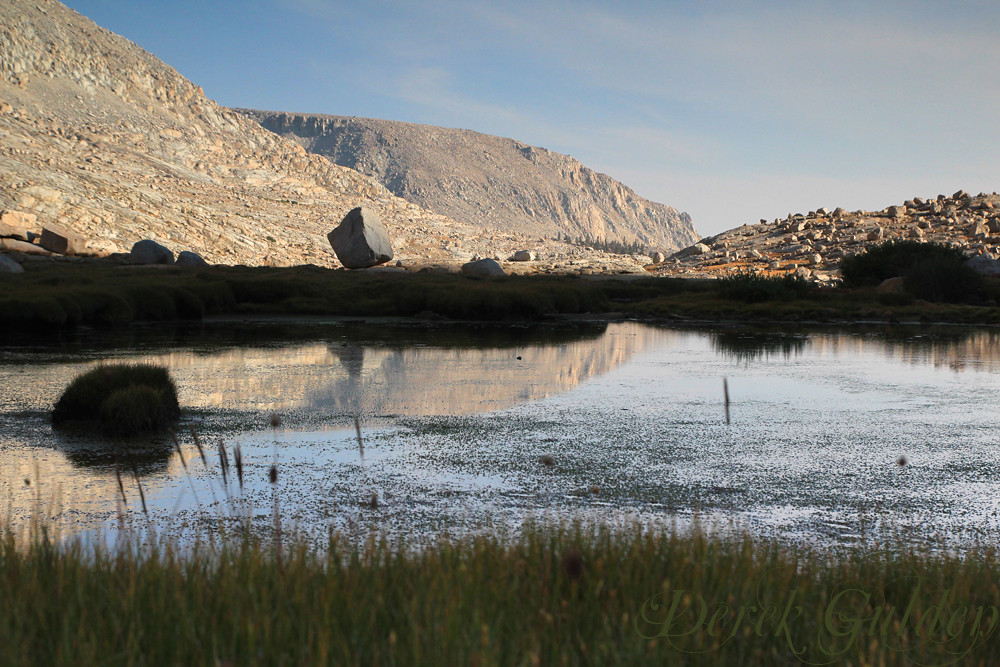 Part 19 The next morning after the sun arose and breakfast was eaten we followed the route we had taken the night before to the tarn. From here we walked around to the western shore and followed a green, grassy corridor downhill between rocky slabs. Then we turned north and contoured the basin's edge as we wandered up, over, around and down rocks and ledges while I tried to make the best possible gradual decent to the creek at the basin's floor, named Rock Creek. When we reached it, we arrived at the exact spot I was aiming for and the same spot I had been at back in 2016; a beautiful, clear shallow pool, shimmering in the sun. Here we stopped for a nice long break, we soaked our feet in the cool water and laid down on the soft grass along the banks. We had finally reached the Miter Basin. After our break we continued on. There is an old trail that is no longer maintained that follows the creek, so we followed that as best as we could. After awhile the path began to fade, and we eventually lost it all together, but all we had to do to stay on course was head north towards the only stand of trees at the far end of the basin, near where a waterfall tumbled down from Sky Blue Lake. The Miter Basin is home to the largest amount of marmots I have seen anywhere in the High Sierra. Yellow-bellied marmots are large rodents in the squirrel family, they have rusty bellies and frosty black sides and backs. They are grazers, munching on the grasses and flowers of the meadowlands, and they stand lookout atop boulders chirping when a stranger or predator ventures into their territory. As Hester and I walked through these meadows the marmots would bounce away from us, then at a safe distance would stop, turn round and watch us wander off into the distance before resuming their grazing. Eventually we reached the pines on the far side. We stopped here and set up camp. The rest of the day was spent relaxing in the shade of the trees and exploring the waterfall and nearby area. Once the shadows grew longer as the day grew older I wandered back along Rock Creek, slowly taking my time, stopping at every twist and turn and exploring every still pool from very angle searching for the best compositions.