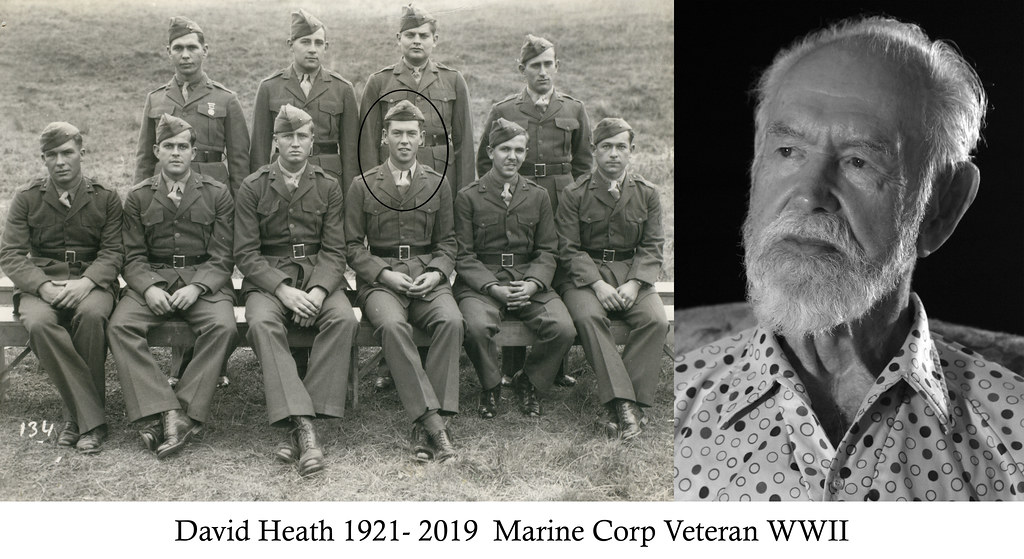 Dave was a good friend of mine who served in the pacific theater of World War II on Guadalcanal . I meet him and his wife at church and asked them if I could interview him about his life and time in the service. It was an honor to have known him and to have had the opportunity to have interviewed him . He passed away on July 3rd, 2019. The interview is on YouTube. watch it here: youtu.be/NyFBh_ABFI8 Thank a veteran this veterans day. Dave helped write his own obituary: David Stanton Heath, 97, resident of Ventura, CA for over 30 years, and resident of Cedar Park, Texas for 10 months passed away on July 3, 2019, at home in Cedar Park, Texas surrounded by his wife of 6 years, Louise A. Perry-Heath, his step-daughter, Diana Richwine, and his step-son-in-law, Gary Richwine.David was born in Toppenish, Washington to Claude Stanton Heath and Florence Dana Farrington-Heath on November 20, 1921. He attended Nashua High School and went on to join the United States Marine Corp in 1940, where he hoped to be an aviation mechanic.His boot camp was 9 weeks in San Diego, CA. They kept him there an extra month working in the mess hall, as he did such a good job. He spent time in Camp Elliott tent area doing guard duty while they built the barracks and paved the streets. They apparently didn’t have much to protect, since their guns had no ammunition and flashlights had no batteries. He then went onto Camp Roberts for rifle training. They then split into 3 units; he was in C Company – 1st Battalion and shipped out to the Solomon Islands August 7, 1942. He spent a month on Tulagi, in the Solomon Islands, and then 5 months and 10 days in the Battle of Guadalcanal, at which there were 120 soldiers down with Malaria, but Colonel Arthur gave one more fight with the Japanese before they were finally relieved with fresh troops. David remembers being so exhausted, that when he climbed the rope ladder to the ship, he only made it to 6 rungs from the top, and he had to lock his arms between the rope and the ship, and it took 6 sailors to pull him up. He went on to New Zealand where he almost died from jaundice and had his appendix removed. David left the Marines as a Sergeant. His Marine bag came here when he moved to Cedar Park, never have been opened since he returned from the war. It was finally opened in December of 2018, and we are hoping to donate the contents to the World War II Museum in New Orleans, LA.David loved kites, model airplanes, coin collecting and flying. His proudest moments were becoming a Marine, as well as working on the blueprint for the L-1011 (he drew the fix for the return air grille, which was then added to the blueprint). He also worked on the cockpit of the L-1011. His favorite memories, are marrying his first girlfriend, Virginia Pearl, making supervisor on the flight line for the interiors of the L-1011, getting flying lessons on a 4 seater Cessna (which he piloted with his wife Ginger and daughter Diane in the back seats), being promoted to Platoon Sergeant in the Marine, and seeing Charles Lindberg flying over his home as a kid. Two of his recent favorite things were going on the inaugural Soaring Valor flight with the Gary Sinise Foundation to the World War II Museum in New Orleans, where he had breakfast with Mr. Sinise, and his time spent with him was the trip of a Lifetime. He also traveled to Washington, DC with the Inland Empire Honor Flight – and was so excited to be able to see all the history/monuments there. His favorite flower is the Gladiola, which we have growing out in front of our home, so he has had an endless supply of them in his room. His favorite foods are the chicken and dumplings Louise made him, homemade spaghetti and meatballs that Diana made him (with no garlic!), Coconut Shrimp from Outback Restaurant, and beans. He loved his beans! He loved his home state of Montana, living in Nashua and having property in Jordan. He also lived in Arizona for 6 years. David is thankful for meeting Louise at the pool that day 20 year ago, and thankful for the wonderful care she has given him all these years. He loves that she was a great cook, housekeeper, and such a smart lady!David would like everyone to know that the best thing in his life was being a Marine and serving his country. Semper Fi!