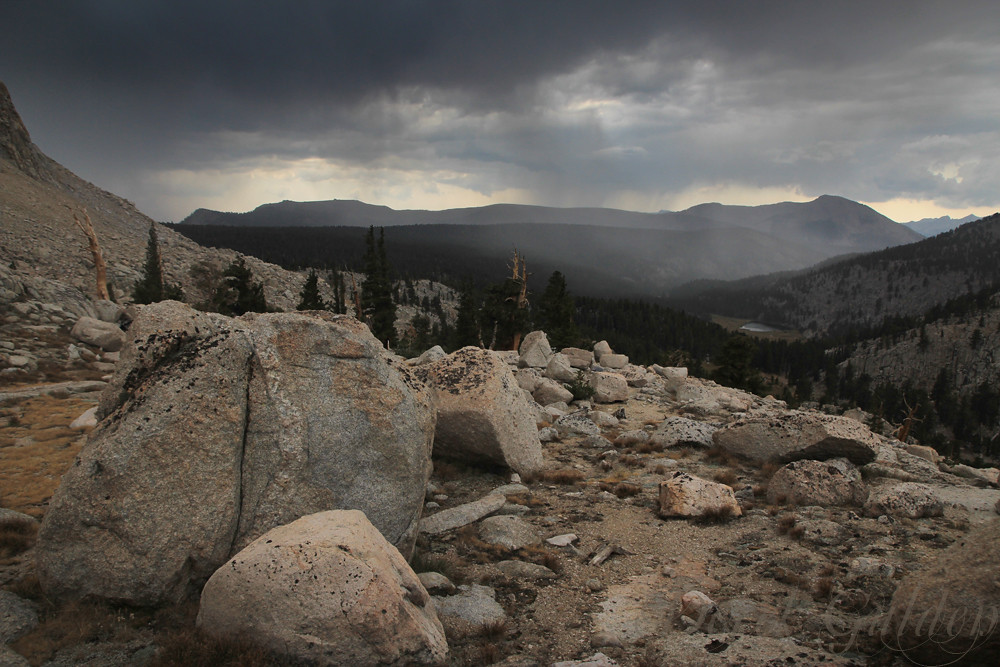 Part 12 As soon as our tents were up we took a well earned rest. I ate lunch beneath the trees along the shore of the beautiful lake. The sky was full of large clouds and was darkest to the west out over the Siberian Outpost and Big Whitney Meadow, and a distant rumble of thunder rolled in from that direction. The valley that held this lake opened to a broad view of the Boreal Plateau that rose over the Siberian Out post, but here at camp that view was partial obscured by a hill to the southwest and trees to the north so I told Hester, who was still resting, that I was going to go over the hill to where I could get a better view of the storm. He told me he'd meet there in a little while. I walked along the lake shore to the outflow creek and made my way through a jumbled maze of willows hiding rocks, flowing water, and darting fish. Once I made my way through the labyrinthine I reached a boulder strewn hillside that was home to a few large trees. It was then that the altitude hit me (11180 feet). Earlier this morning before the hike I had taken an Excedrin (for headaches) and a Bonine (for motion sickness and nausea) in anticipation of altitude sickness and so far it worked great, but now it just hit me. The symptoms were nowhere near as bad as I normally have, but my body was overcome with shaky weakness and dizziness so I stopped in the shade of one of the large pine trees to sit and let it pass. I leaned back, rested my head on the tree, closed my eyes and went into a meditation and visualized myself as one with the tree. It worked, my Self faded and my consciousness expanded into the tree, I could feel our roots twisting around rocks and into cracks and crevasses within the mountainside, I could feel our branches swaying in the wind above and the sap flowing through the strong, towering trunk carrying energy from the sun. Distant thunder rumbled and the relaxed branches tensed for a moment. During this time sun and clouds move across the sky. Footsteps and a voice brought me back into my Self, centered. It was Hester. The discomfort of the altitude sickness had passed and I felt much better. Slowly standing up, I turned to thank the tree placing my hand and forehead gently upon the bark. Then me and Hester navigated the steep mountainside until we got a good view of the storm. From here we could see Soldier Lake 400 feet below us to the north and Rock Creek Lake 1 mile distant to the east, as well as the peaks that encompassed the Miter Basin (which is where we were suppose to end up today had we not stopped where we did) also rising to the north. The sky above us was now a gray monochromatic haze of dark threatening storm-clouds. The clouds were moving in from the southwest but the rain bands swirled in from the northwest and moved east. A mighty wind rose up carrying stray drops from the still distant storm and thunder echoed from hidden, unseen lightning. From our high up vantage point we watched the curtains of rain creeping closer from across the forested valley. Soon the peaks of the miter basin were obscured by a very heavy downpour, their outlines shimmering like a mirage. We watched as a wall of rain moved across the surface of soldier lake. We took shelter under a large boulder as the rain finally reached us. More thunder rumbled. We waited out the storm beneath the sheltering rock until the rain subsided enough not to soak us. We then headed back to camp in a light mist. We didn't know it yet but that thunderstorm would have consequences for the rest of the trip.