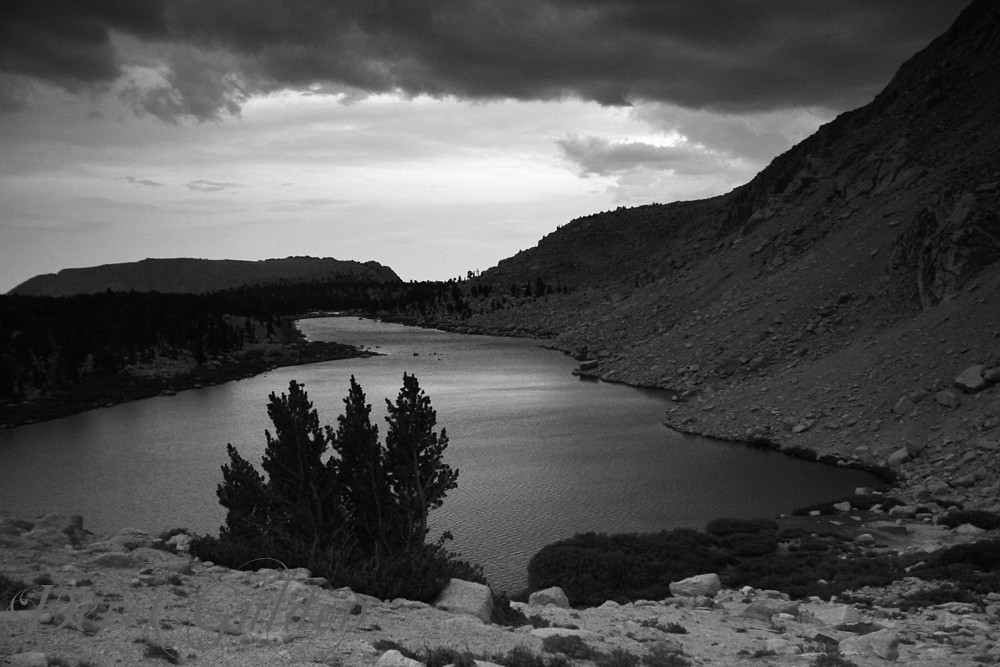 Part 8 A light rain came while I prepared lunch. One of the large rocks near camp I used to shelter myself from the it. By the time the meal was eaten that storm had passed, but another soon followed. It continued like this for the rest of the afternoon, while thunder periodically echoed over the crest. While it rained the air was calm, but in the breaks between the storms the wind howled. As the last storm of the day rolled through the sky darkened as the unseen sun neared the horizon. Once again as that storm passed the wind arrived biting at it's heals. Me and Hester headed to a low, sheltering pine that grew on a hill that overlooked a small lake and the meadows that clothed it. The light slowly faded as we watched a family of deer with four fawns frolicking amongst the willows. Before the last light faded I decided to go to a different spot for a better sunset photo. I headed to where the trail climbed up the sandy slope from lake # 3 to lake # 4. Here I got a great shot of the lake as it snaked away into the valley that held it. A small pine stood in the foreground and since the low light dulled the colors I opted for a high contrast black and white shot. By now darkness had fallen so I headed back to camp. The clouds still filled the sky and I expected the rain to continue on and off through the night as it had all afternoon, but within an hour the stars began to come out one by one and soon the night was crystal clear. We stay out for a while longer stareing up at the arc of the milky way stretching high overhead. He headed into his tent first and shortly after I crawled into mine. Right before sleep took me the jets again broke the silence of the still night. (Today I discovered that the brand new lightweight tripod that I had bought especially for this trip was a piece of junk, which I should have expected since it was only 45$. no matter how much I tightened the head it still wiggled back and forth in the slightest breeze, which made it worthless for timelapse video and slow shutter speed shots as I tried to photograph lightning.)