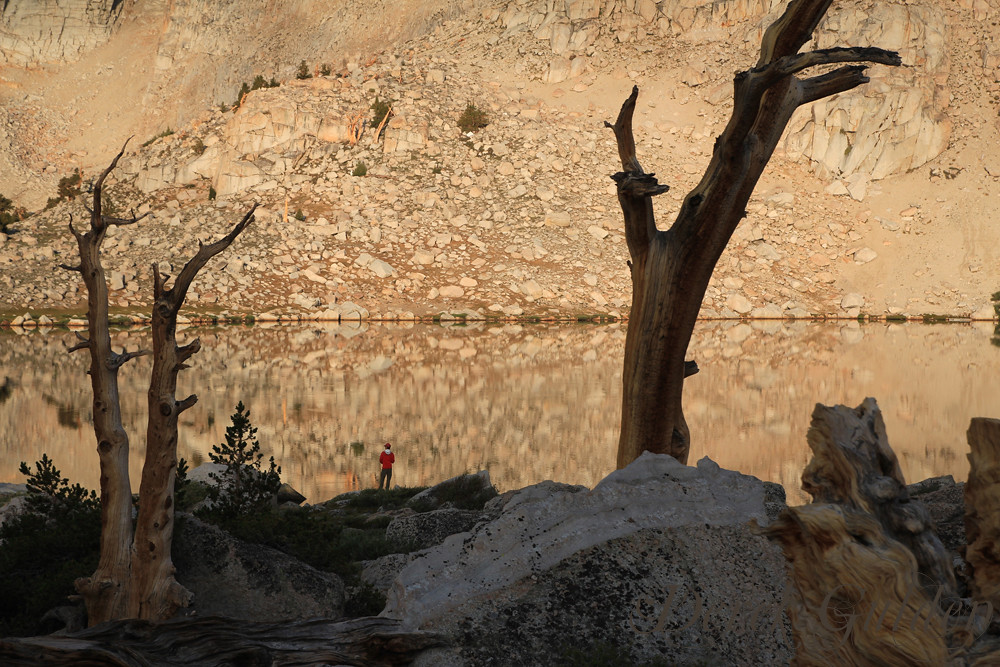 Part 6 While I photographed another backpacker fished, so I decided I'd get a shot of him and his bright red jacket. Once morning photography was done and breakfast was eaten we both wanted to check out the pass we were suppose to go over today but had decided to put it off until tomorrow. There are two passes that ascend the Sierra Crest from the Cottonwood Lakes that take people to the vast wilderness on the other side; Old Army Pass and New Army Pass. Old Army Pass is the route I had chosen for this trip and is no longer maintained. New Army Pass is considered the best option. I have heard mixed reviews of Old Army, some people say it is easy others say it is bad, I guess it depends on weather, lingering snow fields and your level experience. From where we are camped we can't see the path, I have a basic idea of where it is suppose to be from researching it but I'd like to see it with my own eyes. So we headed into the cirque that held lake # 4 and where the pass rose to the crest. The day was still young, but in the full light of the sun it was hot. We took a short break beneath the sparse shade of the last tree along the trail. “If it's this hot tomorrow,” said Hester, “We should get an early start.” “I agree.” I answered. A stray cloud moved in front of the sun and we took advantage of its cool shade. Venturing out from the tree we continued up the trail. Soon the cloud moved on and the rays of sun returned. We came to an outcropping of rock not too far up from the lake and where the trail began it's first switchbacks. Here we stopped to enjoy the view of Lake # 4. A light, cooling breeze began blowing, dancing along the water, sending shining ripples across the surface. By now more clouds had gathered, chasing away the heat. I set up my camera on my new light weight tripod to get some time lapse video. While that was filming, Hester pointed to the top of the pass and said, “There are two people up there, look.” I couldn't see them but he said they were coming down. It wasn't long before I was able to make out their tiny figures against the gigantic mountainside. We watched them descend and as they did they showed us where the trail went, which saved us the trouble of climbing it ourselves. Once they reach us we asked how the trail was and they told us it was no problem at all, that it was easier, they thought, than New Army. There was however a rockfall right before the top that had to be climbed over. After the info we thanked them and they hiked off into the distance. Now that we had the information I wanted we headed back to camp.