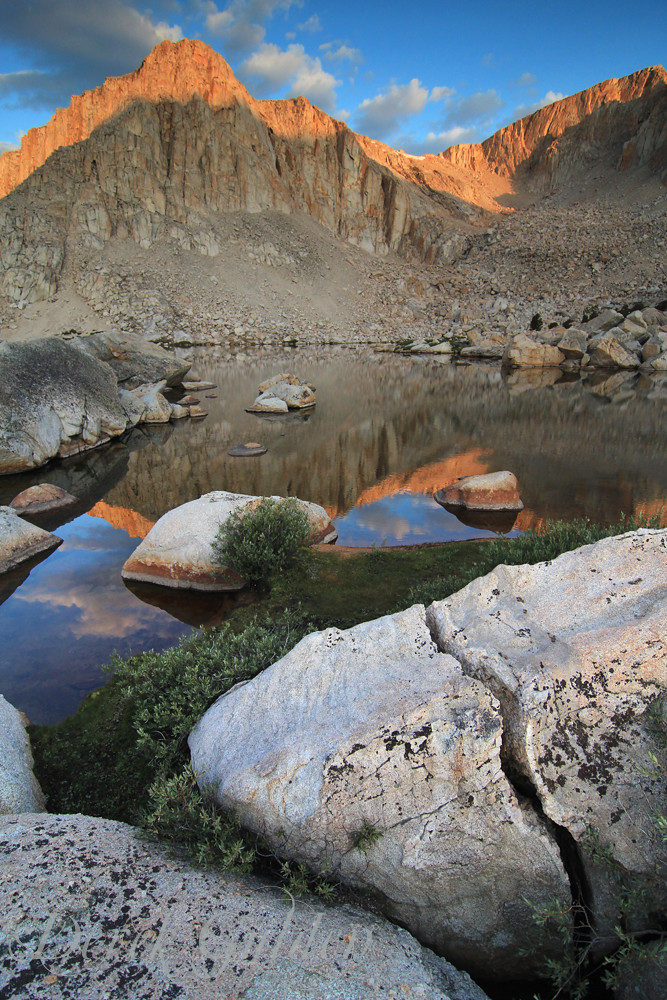 Part 4: Sunrise on the second day

Part 4 The dark storm clouds that had threatened rain all afternoon, by evening had mostly moved on, allowing the pink rays of sunset to grace the few lingering clouds in the eastern sky. Soon the glow faded and the first day came to an end. As night crept over the land, stars came out. In darkness a low rumble of thunder echoed across the cloudless sky, growing louder, continuing longer than what was natural. It turned out to be a military jet, two of them, from China Lake, a Naval air training base to the southeast. The two jets thundered on and off until around midnight. ... When dawn arose along the the eastern horizon I awoke and headed down to the lake shore to look for a good spot for morning photography. A jumble of large blocks of granite lined the shore, with creeping willows growing around them. I followed a maze of trails through to an area where a stream flowed through a meadow before draining into the lake. I took a few shots here but I wasn't happy with the results so I moved on to find better compositions. I came to a place where the large blocks of granite that had cluttered the shore spilled out into the still waters of the beautiful lake. I liked this much more. I experimented with different compositions while waiting for the alpine glow to illuminate the high peaks above the lake. Hopping from rock to rock I went out into the lake as far as the rocks would let me, taking pictures as I went, but none of those shots I felt were good enough, so I headed back to the shore. On the bank was a large split rock, so I climbed on top of it to see what I could get. I liked these shots much better, so I waited. A faint line of pink light appeared on the highest point and began to slowly descend. I got a few shots, then the pink light faded, blocked by clouds in the east. I climbed down from the rock to see if I could get it in the foreground of the shot, I liked this the best out of all the compositions I tried before. The pink alpine soon glow reappeared and I took a few more photos.