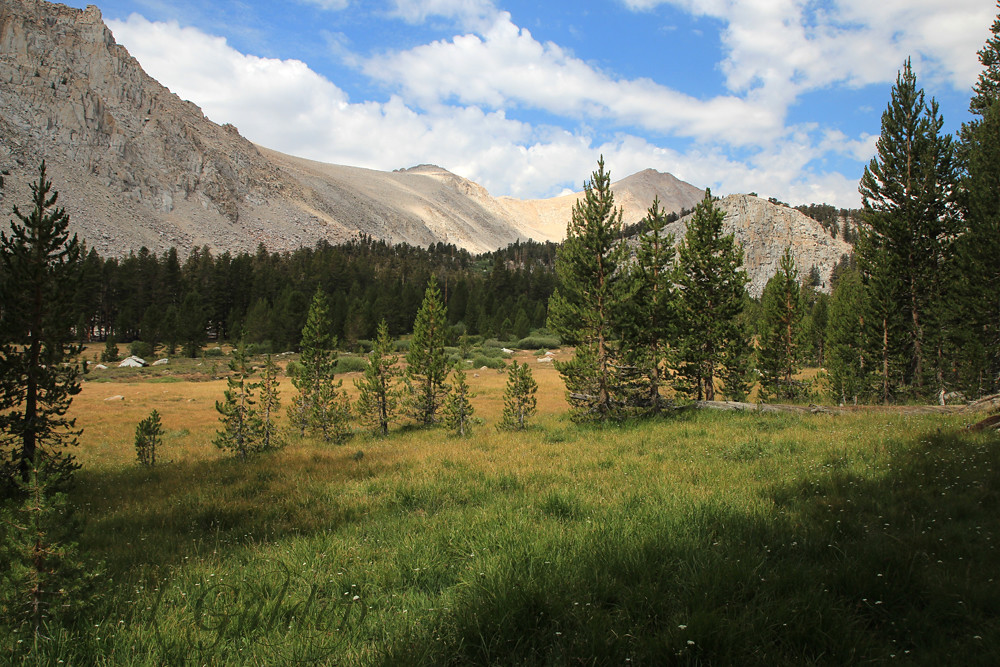 wildernesswanderer.bandcamp.com/album/high-sierra-thunder... Part 2 In morning we reached the campground at the trailhead where we spent 2 days and 2 nights so we could acclimate to the high elevation. (10,000 ft) Yesterday was Friday, today is Saturday. The campground was full when we arrived but as the sun rose higher it cleared out as campers became backpackers going to the Cottonwood Lakes or day hikers looking to summit Mt. Langley, the southern most 14er in the Sierra and the 9th highest (14,042) peak in the range. A beautiful pine forest grew up around us and we relaxed in their shade. As the day lengthened clouds gathered, and distant thunder echoed. I grabbed my audio recorder and headed into the woods away from the parking lot and campground to get away from all the man made noises. The sky was now dark with clouds and another deep rumble shook the air. It wasn't long before I found a spot far enough away that no unnatural sounds could be heard. There was a fallen pine here with its tangle of roots exposed. I placed the recorder with in the roots to shield it from rain and wind, pushed record and began the walk back to camp. I didn't get far when the clouds broke. I could hear the rain approach, distant at first, growing closer, growing louder. I saw a second fallen tree not far away and ran to it for shelter. As soon as I reached it the rain reached me. Big, heavy drops and more thunder. The storm lasted about 10 minutes but it felt much longer. Once the rain stopped there was only thunder. Soon more rain moved in and the wind began to blow. That rain also lasted about 10 minutes. Once the second round was done the real thunder started. For at least 30 minutes the thunder echoed ceaselessly on the other side of the Sierra crest. I have never heard a thunderstorm as active as that one. Once it was over an eerie silence was upon the forest and I went to retrieve my audio recorder. It all lasted 1 hour and 25 minutes. The recording I got is on my bandcamp page for listening and purchase to download wildernesswanderer.bandcamp.com/album/high-sierra-thunder... I currently have 2 other albums on there as well, more are to come. That night the campground was full and the sky was clear. Sunday came and the campground emptied again and didn't refill since people had jobs to go back to. Another storm arose again today though it was no match for yesterday's tempest. The majority of this storm appeared to be over the Cottonwood Lakes which is where we would be going to tomorrow. Sunday night the campground was empty. On Monday morning we started on trail. Our packs were loaded with 13 days worth of food, mine was 50 lbs and his was about 40lbs. The trail led us through the forest and soon we reached a creek where the trail split. We took the less traveled route that followed the creek, though both would take us where we were headed. From here on the forest grew lusher. The creek was mostly hidden from sight but not sound. This was Hester's first time venturing into the High Sierra and so far all he had seen of it was this forest that hid the high peaks. At the half way point we reached a wonderful meadow of green speckled with little white flowers and a ridge of white Sierra granite rising over it, his first glimpse of the high country. We stopped here for an extended break. His pack was rubbing the wrong way and he needed to get it off.