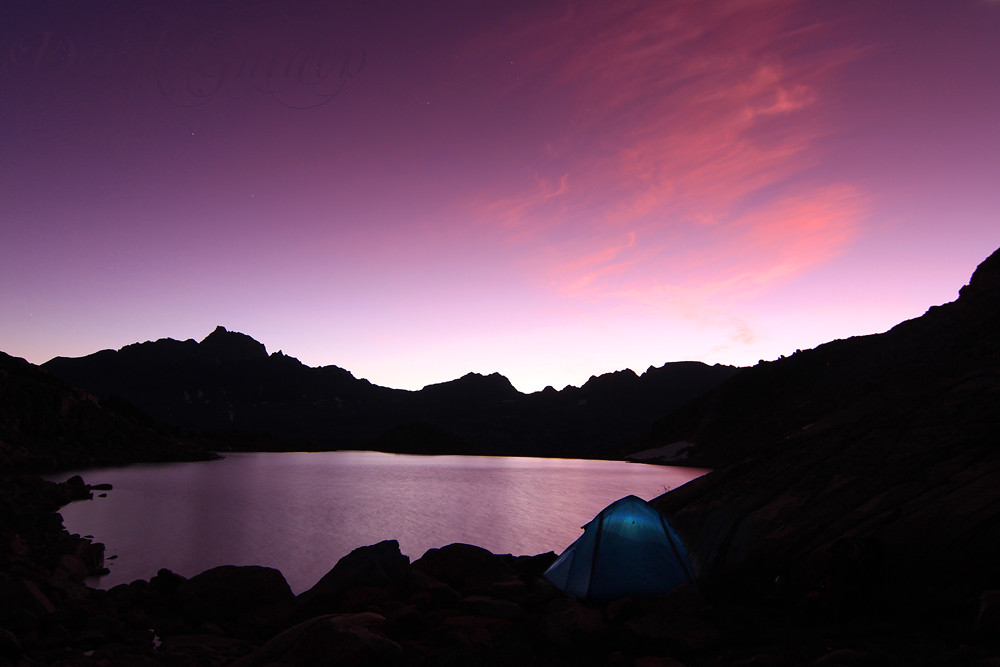 Part 17 The sunlight continued to flicker like a naked candle flame in shifting air currents the rest of the day. While I was scurrying around looking for good compositions a disembodied voice called out to me by name, “Have a good afternoon, Derek.” Spinning around to see who said it, I saw no one except the guy and his dog, whom I had passed by earlier and who I also never told them my name, on the far shore. I decided to head in their direction to find out if there was someone else hiding amongst the rocks that I couldn't see. As I made my way back around the lake towards the meadowlands where they were camped the voice called out again, “How was your climb up?” I recognized the voice, it was Jan from the previous day. I still couldn't see where she was, but I replied any way, “It was great! Where are you?” “Up here.” looking up I saw her sitting high up on a rocky ledge atop a small trickling waterfall (calling it a waterfall is being too generous, it was literally just a trickle and hardly flowing). So I climbed up to where she was. “It's a beautiful lake.” she said, “I'm surprised I made it up, it took me three hours, but it was worth it, thank you for recommending it.” We talked for a bit longer and during that time we started to wander towards the meadowlands together. Once we reached them she sat down again for break. “I wish I was still young like you, but at least I'm still coming up here, I just have to take my time.” A break in the clouds as warm light washed over us and the lake shimmered. She turned her face to the sun and smiled in it's comforting warmth. The sun had crept closer to the ridgeline as the day had grown old. “It going to be night soon and I should be getting back to my camp before sunset.” She said, then added, “ Stop by on your way down.” After a short hug she turn towards the meadows and began hiking back to her camp on the hill overlooking Muriel Lake. I lingered in the meadows for awhile before heading back to my camp. While here I took a few photos of the glittering light. The wind had died and the reflections had returned. The clouds began to disperse and shrink and what chance of rain there seemed to have been vanished with the clouds. I headed back to my camp and reached my tent as the sun finally reached the ridgeline and set behind the towering peaks. The light that was left set Muriel Peak ablaze and the lake in the turbulence of the fire lost its reflections yet again but still retained its ability to scatter color. The rippling water became a dance of color; red, pink, blue, black, white and orange. I spent the rest of that sunset trying to photograph the flaming peaks with a large snow patch in the foreground but none of those compositions turned out in a way that I liked. It wasn't long before the light faded completely and the sun at last finished her journey across the wide sky as she sunk beneath the unseen western horizon. As night closed in and stars began to peak out I climbed into my tent for the night. I would much rather have slept out side beneath the wide sky but I was lazy and didn't feel like taking my tent down. The only reason I had set it up was because it look as though it might rain, but now the sky was clear. There were no other spots nearby that I knew of that were flat and rock free for camping, and the meadow was too far away to hike to in the dark and was also home to mosquitoes. So my tent was where I slept. … I awoke early, earlier than normal. I peaked my head out of my tent's door and saw thin wispy clouds glowing faintly pink with the still far off dawn. So I quickly got dressed and headed out side with my camera. I propped it up with a rock in place of a tripod and took a photo looking back at my tent.