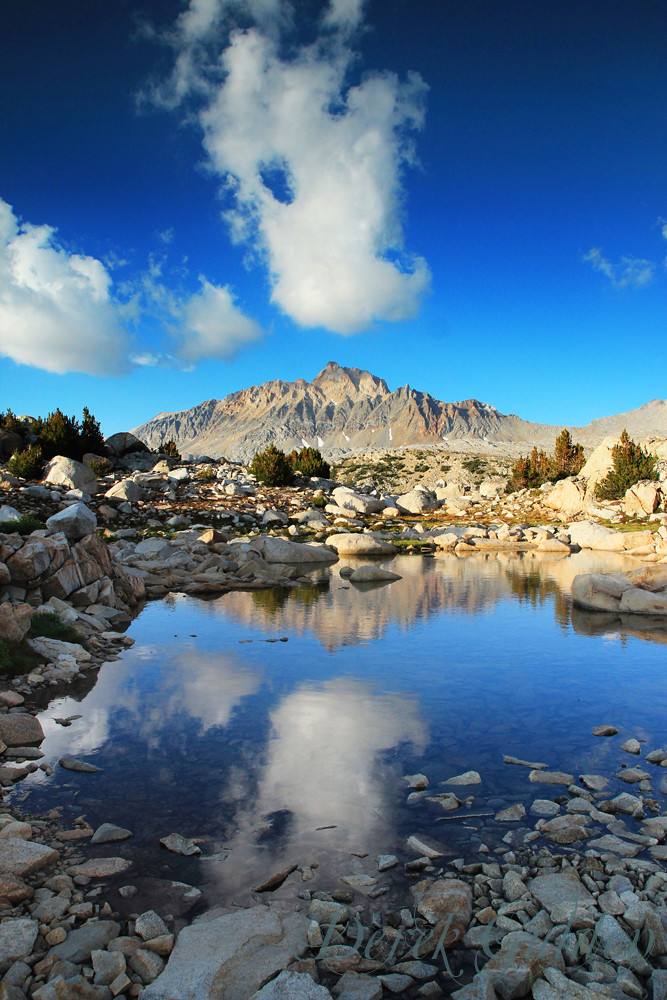 Part 12 I made my way up to the pass and then from there I cut west across rolling terrain and a spotty trail toward Murial Lake. Soon her blue waters came into my sight as the land unfold to reveal her. I worked my way around the hilly shore line looking for a good place to set up camp. It wasn't long before I found a nice spot in the shade of a stunted pine growing between cracks in a large flat sided rock that provided sheltered from the wind. Here I stopped and sat down with my back against the cold rock and took a nap. I awoke to footsteps and a voice. I opened my eyes and saw an old lady. Her name was Jan and she had been dropped off by mules a week earlier and had been out here by herself doing day hikes to the surrounding lakes. She was very friendly and we talked about our favorite spots and how she use to work for the high sierra camps years ago as a cook, but now in her retirement she would come up here alone for weeks at a time. I asked her if she had ever been to Goethe Lake since it was just a short walk away. She had not and I invited her to join me tomorrow when I would make my own way up there. She said that would be great but that she hikes slowly and I said it wouldn't be a problem. she pointed to one of the many hills and said that her camp was up there, but i wasn't sure which hill she was pointing too. After we talked a while longer she headed back to her own camp to make lunch. I got up and looked for potential sunrise / sunset photo compositions and I found one that I really liked for sunrise. As the sun crept further through the sky the day progressed and soon a group of people showed up. They were from the sierra club and were out here for the next two days. A tent city soon was set up nearby, and some of the tents were right in the middle of the shot that I had planed on for sunrise. The morning sky had been clear and cloudless, but as the day wore on clouds gathered as they had yesterday. I wandered around the lake looking for some good photos to take. Clouds always make any shots better and more interesting, couple that with how they allow the dappled light to paint the earth and it makes them that much better. Some lakes are easy to photograph and other are more challenging. This was one of the more challenging ones. But I soon found a shot that I liked. I took many others but none of them affected me like this one.