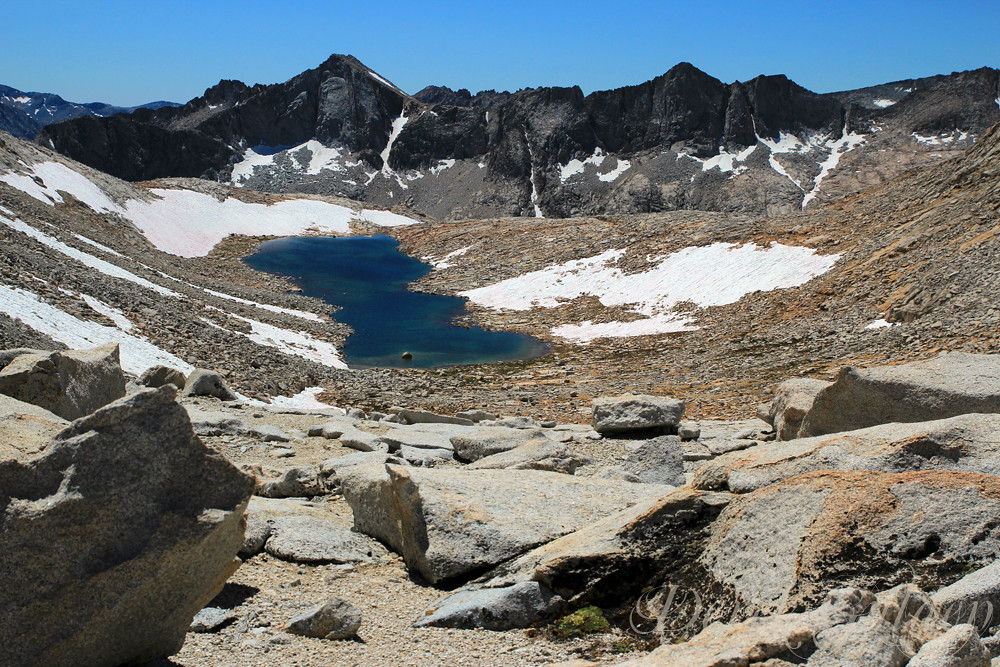 part 5 My original plan was to climb up Ruskie Pass to Seven Gables Lakes, but while I was photographing sunrise I decided not to because it was a long steep climb with a large snow field at the top that looked like it was best avoided. From there I was going to continue through the Bear Lakes to Granite-Bear Pass and down into Granite Park for a night or two before heading to Royce Lakes and then Royce-Merrium Pass, after which I was going to meet back up with the Piute Canyon Trail. However I really did not want to go back the way I came because of all the mosquitoes so I decided to do Royce-Merrium Pass first to Royce Lakes then Granite Park and exit at Pine Creek. ... After sunrise was thoroughly photographed, I went back to my camp and packed up as quickly as I could now that the swarming mosquitoes had awoken. Then I climbed back up the waterfall and continued upwards and on-wards in the direction of Royce-Merrium Pass at 12200 ft. I followed the creek that would become the waterfall, went passed a beautiful tarn and continued over alpine tundra until I came to another creek that tumbled down from an unnamed lake that lay beneath the pass I was aiming for. After a few hours of hiking I eventually reached the outflow of the lake and dropped my pack there. The current had allowed a sludge of the dead, decaying bodies of mayflies to collect along the natural rock damn at the outflow so I did not want to fill my water bottles up in the lake. there was a large snow field on the southern shore so I went over to it looking for any places where melt water might be flowing so I could fill up there and I found one. After filling up I headed back to my pack and made myself one of the dehydrated meals for my first meal of the day. After that I continued along the northern shore towards Royce-Merrium Pass. Little vegetation grew up here, and in the shaded crevasses between the talus boulders buzzed mosquitoes, like vampires hiding from the burning rays of sunlight. Soon I came to a snowfield that blocked my path. It reached high up the steep slope and all the way down to the lapping ripples of the long lake. I found what I though would be the best spot to cross and, even though I probably didn't need them, I put on my crampons since I'd rather be safe than sorry. Once I was safely across I continued to the far end of the lake where the land began to slope up to the pass. The air is still and thin, slowly I make progress, stopping a few time to sit on a nice "comfortable" rock. After much effort the slope leveled out and I reached the top. I am overcome with relief and a great sense of accomplishment. I take a few more steps until I can see the down slope of the other side and the joy that I felt upon reaching the pass sank away. Before me lies a massive snow field steeply falling away to the blue lake far below. At the top of the pass on the eastern side, the side I would be going down, there is a chute, a steep chute, that is filled with so much snow that it is an almost straight down drop. I have an ice axe and crampons, but even still there is no way I am going to be able to make it safely down the other side. I have to go back... $**t! I found a nice spot to drop pack and rest and take a nap. The silence up here is so intense that it seems to have a weight to it, like it is pressing in on me from all sides, pushing down on me. I have never before experienced silence like this before.